ACHIEVING irrigation efficiencies is an ongoing objective whether you are a producer or community facility, and, in an increasing number of cases today, more flexible, modernised solutions are making life and bank balances a little better.

Upgrading the irrigation system at the Berrigan and District Race Club in New South Wales has been described as “out with the ark and in with the new’’ by the club’s Curator and Vice President, Ken Moar.

The club may only have three race meetings a year, with just two of them requiring irrigation leading up to the events, but country racetracks are part of the fabric of regional communities and the new system has made the job much more simple and efficient for Ken.

One of the Riverina’s most respected courses, Berrigan has been staging races since the 1890s.

Ken, who is also a local potato grower, has been managing the course the past 15 years, while his wife, Sandra, tends to the rose garden.

For many years, Ken had to tow around an old aluminium irrigation unit to water the predominantly kikuyu turf, however, after meeting with his local ProWater Nationwide store, Murray Valley Rural Services, and consulting with Philmac, the club decided to upgrade to a new system.

The heart of the system is a series of highly durable, transportable pods. Made from advanced thermoplastics, the pod protects a sprinkler that is firmly attached to the strong and flexible polyethylene K-Pipe, which resists kinking, abrasive soils, freezing, UV light and the stresses of transporting.

The low cost, modular system can be shifted easily, even by a quad bike, and it can adapt and grow as required, efficiently irrigating from 1 hectare to more than 10,000ha. The preference is to shift the K-Line while the sprinklers are operating.

“With the old, towable aluminium system, the rubbers were gone and the joins were leaking a bit. That’s where the pods are good, because they don’t leak,’’ Ken said.

Using two, 200-metre lengths of the 45-millimetre flexible tubing, the club opted for the standard 43-centimetre by 23cm pods, located every 15m along the tubing, and Senninger single jet sprinklers.

“I tow it around with a Nissan Patrol ute and it is certainly a lot quicker than towing the aluminium system.

“We have hydrants every 400m around the track and we just hook them up. We use recycled water and can have both going at the same time.’’

Comprising red sandy loam soil, the course is irrigated for six weeks prior to the club’s March and October race meetings.

“We put it together easy and we haven’t had to touch it. There’s been no damage – the flexible pipe is very good,’’ Ken said.

“It is cost competitive and it’s certainly pretty efficient.

“It’s also a more gentle application. We don’t get any run-off, which we did with the aluminium system.

“We have a valve on the pump where we can increase or decrease the pressure – we can control the flow rate.’’

James Waugh, Category Manager – Water, with Murray Valley Rural Services at Berrigan in New South Wales, which also has a store at Yarrawonga in Victoria, said he helped Ken put the first unit together in about one hour and 20 minutes and the club was considering a further two systems, which would then total nearly 1 kilometre of irrigation.

“It is a DIY (do it yourself) project to put together. You work out the line, pods and configuration and all you need is a shifter, rubber hammer and drill,’’ James said.

He is expecting further demand for K-Line Pod Irrigation from other sporting clubs, small farmers and vegetable growers throughout the region.

“It really is about improved efficiency of water delivery – you can move water cheaply.’’

James said Murray Valley Rural Services aimed to hold a field day at the Berrigan and District Race Club so other sporting clubs and individuals could view the system. 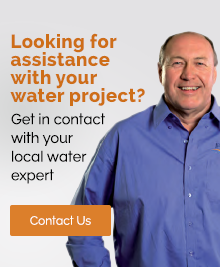